The slender and sleek HK Pitcher was conceived by the legendary sculptor Henning Koppel, and it is widely considered an icon in Danish design history.

The jug holds up to 0.75  litres, and it is the ideal choice, if you want to serve water with finesse. You can also use it as a wine carafe – or as a vase for your flowers.

The HK Pitcher is made from mirror polished stainless steel.

This is the medium version of the Henning Koppel pitcher, The design is also available in 1.2L and 1.9L versions. 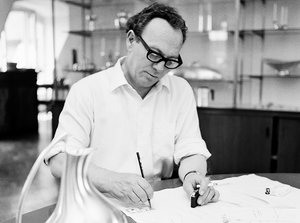 Henning Koppel was a native of Copenhagen and joined the Georg Jensen Company when he was 27. He had just returned to Denmark from Sweden where he, a Jew, had fled to escape the German occupation of Denmark.

He was trained as an artist, particularly in drawing and sculpture and studied at the Kunstakademiet (Royal Danish Academy of Fine Arts) and the Academie Rancon in Paris. From the beginning, his silver work was abstract and sculptural and unlike anything that went before. His early designs were for jewellery and the forms were flowing and organic looking, closer to the work of other artists of his time like Aalto, Calder, Dali and Leger than anything ever produced at the Georg Jensen silversmithy.

By the late 40s, Koppel shifted to designing primarily hollowware and his pieces bear a distinctive sculptural quality harking back to his training as a sculptor.